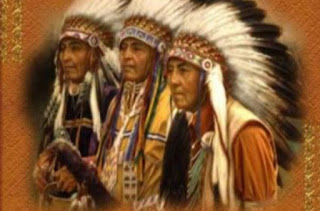 The Five Civilized Tribes were the five Native American nations: the Cherokee,
Chickasaw, Choctaw, Creek, and Seminole, which were considered civilized by
white settlers during that time period because they adopted many of the
colonists' customs and had generally good relations with their neighbors. The
process of cultural transformation was proposed by George Washington and Henry
Knox; the Cherokee and Choctaw were successful at integrating European-American
culture. The Five Civilized Tribes lived in the Southeastern United States
before their relocation to other parts of the country, especially the future
state of Oklahoma.

There are two important tools that you should use if you are researching Native Americans. The tools are known as the Dawes Rolls and the Guion Miller Rolls.

The Dawes Rolls, also known as the "Final Rolls", are the lists of individuals who were accepted as eligible for tribal membership in the "Five Civilized Tribes": Cherokees, Creeks, Choctaws, Chickasaws, and Seminoles.

The census card may provide additional genealogical
information, and may also contain references to earlier rolls, such as the 1880 Cherokee census. A census card was generally accompanied by an "application jacket". The jackets then sometimes contain valuable supporting documentation,
such as birth and death affidavits, marriage licenses, and correspondence.

Today these five tribes continue to use the Dawes Rolls as the basis for determining tribal membership. They usually require applicants to provide proof of descent from a person who is listed on these rolls.

The following site will give you a step-by-step example of what you can find using the Dawes Rolls at the Family History Library. In this example, the name of the person is George Guess and he is from the Cherokee tribe.

To go to this site, click on Dawes Roll.

However, the Guion Miller Rolls are an excellent source for family history and genealogy for Cherokee Indians.

The 1906/09 "Roll of the Eastern Cherokees" is better known as "The Guion Miller Roll". It was created as a result of a successful lawsuit filed by three groups of Cherokees who had not been paid all of the money due them as a result of the 1835 Treaty of New Echota. This is the ILLEGAL "treaty" that resulted in the forcible removal from their homes of those Cherokees who refused to give up their tribal citizenship, and the infamous "Trail of Tears" in 1838/39. Thousands were first herded into "pens" and for weeks/months were given food that was not fit for human consumption, contaminated drinking water, and most were forced to sleep in the open. This was done in order to "break their spirit" so they would agree to go to the western wilderness lands of Indian Territory! It worked-- by the time they were to be transported, they would have agreed to go ANYWHERE in order to get out of the pens!


The Guion Miller Roll is the most important source of Cherokee genealogical research of any of the rolls, because the application required extensive information to be supplied by the applicant. Between 27 Aug 1906 and 18 May 1909 there were 45,940 applications filed from the United States, Canada, Mexico and-- Syria! It listed an estimated 90,000 individual applicants. Each qualifying applicant received a warrant worth $133.33 for their share of the one-time payment due to them. In order for an application to be accepted on this roll, the applicant had to prove descent from a person who was shown on the 1835 roll of Eastern Cherokees (also known as The Henderson Roll), which listed the citizenship of the tribe at that time. In order for them to have been listed on that roll as "citizens", they had to have lived in the Eastern Cherokee Nation.

Finding and even verifying an ancestor who was accepted on this roll will N-O-T qualify you for tribal membership in the Cherokee Tribe today, only the 1902 Dawes Roll will do that (see "Requirements for Enrolling"- clickable from the main page). What it WILL do is give you at least two generations of information back from the applicant.

The following site will give you a step-by-step example of what you can find using the Guion Miller Rolls at the Family History Library. We will use an example that we used in Dawes Rolls.  In this example, the name of the person is George Guess and he is from the Cherokee tribe.  Not only did George Guess make an application in the Dawes Rolls, but he made an application, 10 years later in the Guion Miller Rolls.

To go to this site, click on Guion Miller Roll.

The Iroquois Nation was a confederation of six Native American Tribes:

The 1900 US Census is a special census for American Indian research.  On the search page under the heading RESIDENCE, there is a drop down menu for the States.  When you click on that drop down menu, you will see one of the States listed as Indian Territory.

For a step-by-step example of how to find Indians in the 1900 US Census, click here.

There is a large 86 volume collection called The Chronicles of Oklahoma, by the Oklahoma Historical Society, that has information on all tribes.  In the Family History Library (FHL) in Salt Lake City, Utah, the set is located on the 3rd floor under the following call number:

There are three indexes for this set:

The 3 indexes are general indexes and you can look up individual names, tribal names, place names, etc.

If you know the State in the United States where your Native American ancestors lived, go to the following web site:

At this site you will see the following map: 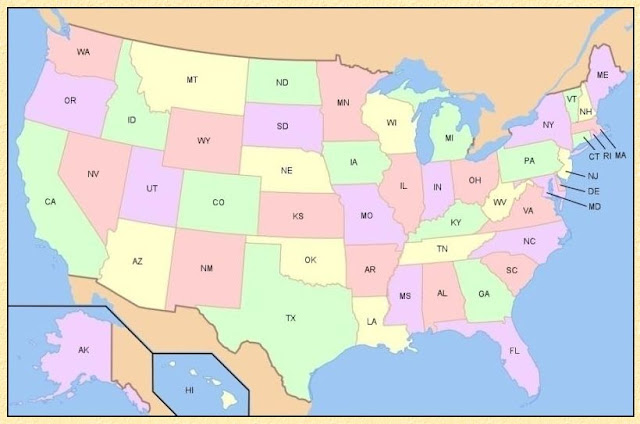 Map of the United States

At the internet site above, the map is a clickable map.  As an example, suppose you know your Native American ancestors lived in Florida. If you click on Florida, you will get the following map: 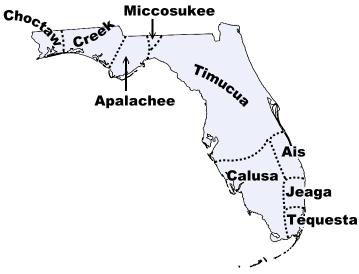 This shows you the tribes that live in Florida.

INFORMATION BY TRIBE - All Tribes

If you know the name of the tribe you are researching, there is a great internet site that may help.  It references a tremendous research tool called "The Handbook of American Indians North of Mexico" by Frederick Webb Hodge.  The internet site is:

Below is a quotation from the web site about the book

The Handbook of American Indians North of Mexico was compiled by some of the best and well known Indian researchers of that time. Many of which wrote only about specific tribes. The work began in 1873 and was submitted to the Bureau of Ethnology for publication in 1905. There are approximately 2,500 tribes listed in the book. 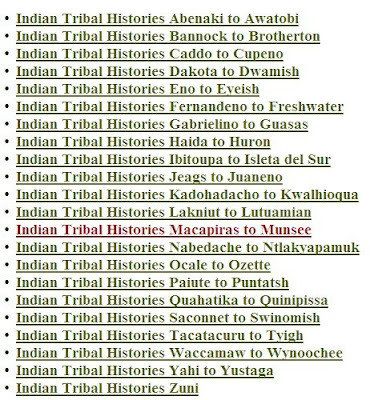 As an example, if you are interested in Mohawks, Click on "Indian Tribal Histories Macapiras to Munsee" and you will get the following:

Click on the word Hodge and this will give you about five pages of information on the Mohawk tribe.

Pennacook
Penobscot
Pequot
Poosepatuck
Pottawatomie
Powhattan
Pueblo
Rappahannock
Sauk
Seminole
Seneca
Shinnecock
Shoshoni
Sioux
Tillamook
Tunica
Tuscarora
Utes -
Original 7 clans
1. The Mouche
2. The Capote
3. the Weeminuche
4. the Tabaguache
5. The Grand River or Parianuche
6. The Yampa or White River and
7. the Uintah.
Now there are the following:
The Northern Utes in the Uintah-Ouray Reservation (representing the Tabeguache, The Grand
River, The Yampa and the Uintah Clans).
The Southern Utes Reservation (representing the Mouche and Capote Clans).

Black Hawk - Sauk
aka: Makataimeshekiakiak
Born: spring 1767, in Saukenuk, Illinois
Was a war chief
Disputed the treaty of 1804
Fought with the British in the Revolution
Black Hawk War
Died: October 3, 1838
more 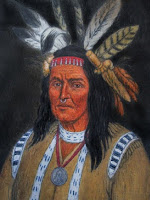 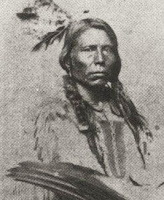 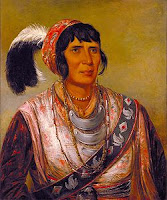 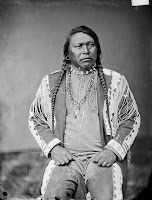 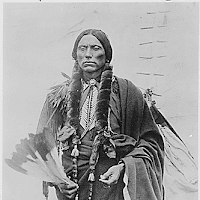 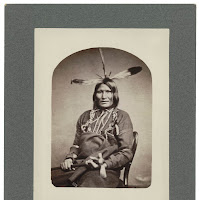 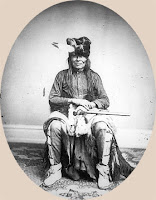 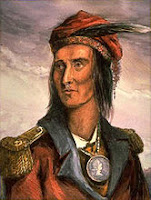 Tecumseh – Shawnee Chief
born: March, 1768
also known as (aka) Tecumtha or Tekamthi
Brother: Tenskwatawa aka the prophet
United Native American tribes into one
Died: October 5, 1813 in the Battle of the Thames
more 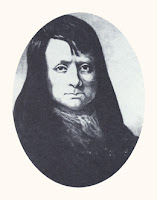 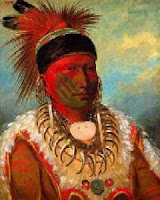 White Cloud - Iowa Chief
a.k.a Masakah and Mahaskah
His father, Mauhawgaw, was killed by the Sioux
White Cloud avenged his father's death
Fought 18 battles with other tribes
Married 10 women
Killed in 1834 by a fellow tribesman.
more 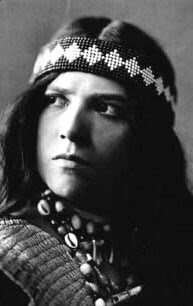 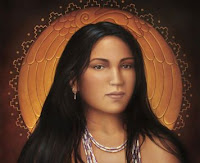 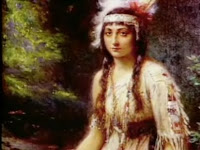 This is a summary of the Native American Research internet site. The major information repository for this site will be the Family History Library of the Church of Jesus Christ of Latter-day Saints in Salt Lake City, Utah. The goal of this site is to find information about Native Americans families in several ways:

For Native Americans of the Five Civilized Tribes (Seminole, Cherokee, Choctaw, Chickasaw and Creek), a section of the site will show what the Dawes Rolls are and how they can help find Native Americans in those tribes.

For Cherokee Native Americans, a section of the site shows what the Guion Miller Rolls are and how they can help find Cherokees.

There is a section on an 82 Volume set called the Chronicles of Oklahoma.

There is a section to help find information about a tribe.

There is a section to help find information on Native American Chiefs.

There is a section to help find information on Famous Native Americans.

Click on the name of the following Famous Native Americans:

Posted by Robin Davis at 4:23 PM No comments: